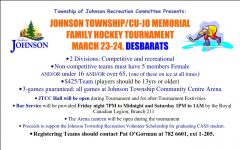 We are now taking team registrations for the Family Hockey Tournament which is scheduled for the weekend of March 23 and 24. Here’s the details: